Numbers and needs may bring back military draft 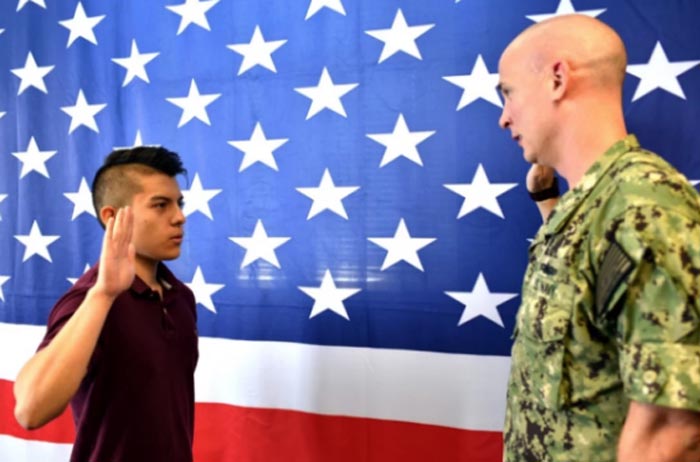 This article by Todd South originally appeared on Military Times, the nation's largest independent newsroom dedicated to covering the military and veteran community.

WASHINGTON — Over the past five years, retired Army Maj. Gen. Dennis Laich and Col. Larry Wilkerson along with members of the All-Volunteer Force Forum have traversed the country in an effort to address what they see as a looming crisis in the military — dwindling numbers of qualified and interested recruits for a military straining at the seams.

And they’ve got the solution: Bring back the draft.

The pair, along with William Hartung, director of the Arms and Security Project at the Center for International Policy spoke to a crowd of a few dozen attendees in the Capitol Visitor’s Center Tuesday.

Impeachment hearings and other congressional business may have drawn away interested parties, but Wilkerson was not deterred. Each year they hold a daylong forum which lays out in detail how a draft could help close the military-civilian divide, cut recruiting spending and personnel costs and even help engage the citizenry to reduce or eliminate the militarization of foreign policy.

But Laich threw a kind of curveball at the common narrative that there just are not enough young American’s willing and able to serve in the armed forces.

It’s the “willing” part that the draft can eliminate, Laich said.

As he broke down the “AVF Arithmetic” for the audience, numbers did reveal themselves.

For example, an estimated 4 million people turn age 18 each year. Of those, the Pentagon estimates about 30 percent can qualify for military service, giving the armed forces 1.2 million men and women to bring on board.

But only 180,000 of those 1.2 million are willing and able, Laich said. That leaves more than 1 million potential recruits on the table.

And the services only need about 150,000 each year to maintain the force, he said.

“Numbers are not the problem,” Laich said. “It’s about who we access and how we use the law.”

Laich authored a book on the subject, “Skin in the Game: Poor Kids and Patriots,” and co-founded the forum to tackle the problem.

Some of the numbers they present bear that out. The Army, for instance, fell short of recruiting goals even after adjusting its initial mark last year. And this year took on even slower growth towards what officials had called for in recent years.

And to meet that, Laich said, the service spent $429 million in enlistment bonuses.

Alongside that recruiting money, the Army also granted between 10 percent to 12 percent of them some form of waiver either for weight, drug use, criminal records or test scores.

Nearly 2 percent, or close to 1,200 of those active Army recruits, were considered category IV recruits, scoring in the 10th to 31st percentile on test scores. Those recruits, a decade-old RAND study showed, wind up being 20 percent to 30 percent less effective in their jobs than category II and III soldiers, Laich said.

By scratching using the leverage of the draft on the larger numbers, Laich and Wilkerson said that the services would no longer need to court lower-quality recruits, grant as many, if any, waivers and bring a few National Merit scholars and All-American linebackers into the fold.

And to these men and their colleagues, it isn’t a matter of if the draft will return, but when.

That’s because a combination of ever-growing missions for the military and outside pressures on the dollars being spent their will force it, they said.

Those missions and challenges will include a rise in humanitarian and disaster relief in the face of increased natural disasters linked to climate change and a national defense policy that seeks to meet peer competitors such as Russia and China. Meanwhile, badly needed investments in the economy, environment and education competing with defense dollars, the panel said.

“We’re going to need a lot more soldiers and Marines, and probably the all services, as well,” he said.

That’s in part to competing with peers but more is needed for the military’s long reach to address what some predict to be a massive refugee and resources crisis over the coming decades as climate changes forces rising levels of conflict and displacement.

Wilkerson points to recent Hurricanes Irma, Maria and Harvey, all of which required major efforts from multiple states’ Guard units. The Texas Guard called up all 12,000 of its troops to respond to devastation in Houston.

And the drain on Guard, Reserve and active troops for the response to assist Puerto Rico continues in some forms.

Now, Wilkerson said, imagine if we had such events straining us on the homeland while at the same time needing to deploy a high number of troops to a shooting war abroad.

There wouldn’t be enough troops to do both.

For those reasons, the panel members see a measured way of reinstating the draft as the best option for getting Americans reacquainted with such service that previous generations took as the norm.

“We need to start,” Wilkerson said. “We need to have at least a small bit of conscription."

The suggested method was laid out in Laich’s book and remains his summarized recommendation.

A national no-deferral lottery system for men and women.

If selected, the person would have the option of three choices — serving two years on active duty following basic training and job training; serving in either the Guard or Reserve for six years after the same training but if deployed for one year or more, service obligation would be considered satisfied; if the selected person wants instead to attend college then they would participate in the Reserve Officer Training Corps and serve a commission. If they fail to gain a commission then they revert to option one or two.

The larger effect, forum members hope, is to engage citizens in how the country uses its military.