A VA message regarding COVID vaccinations

Making a Difference: Advocacy in Action - 2021 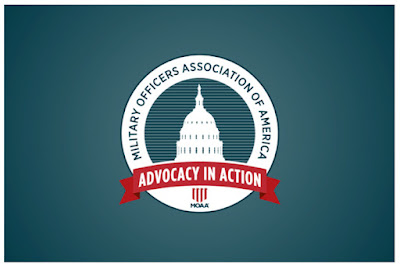 by Dan Merry (excerpted 10/6/2021 from MOAA.org)
It has been a while since MOAA launched Advocacy in Action in April, calling on you to overcome the pandemic and once again meet with your legislators either virtually, via email, or over the phone.  You made a difference despite all these logistical challenges, and we applaud the overall results:  MOAA members contacted all 535 congressional offices, sent over 20,000 messages to the Hill, and conducted 350 meetings in various formats.

Here’s a synopsis of the three topics we asked you to share with your legislators:

You communicated the long-term effects of Agent Orange on our Vietnam veterans, as well as the service-connected illnesses from the Gulf War and Iraq and Afghanistan. What started as four bills became the catalyst for overarching (omnibus) legislation offered by the House and Senate – together, this topic has amassed 200 co-sponsors, including key legislators from both chambers.

What’s Next? While we seek favorable legislation sooner than later, Congress is still coming to grips with funding the government and finding common ground on infrastructure improvements proposed by the administration. Legislation being sought here is not tied to the FY 2022 National Defense Authorization Act (NDAA), so it could have success as a standalone bill or be wrapped up with other supplemental legislation or appropriations. All of our efforts to date will be relevant as we head into the second session of this Congress in January.

You made sure our legislators understood that kids from military families transitioning to adulthood lack the same health care protections as civilian families who have commercial plans. These concerns were made worse during the pandemic — and also complicated by the prospects of serious TRICARE Young Adult premium increases next year.

Even with nearly 100 co-sponsors from the House and Senate, we did not have enough to compel inclusion in the House version of the NDAA, nor through the Senate Armed Services Committee (SASC).

What’s Next? Thankfully, we have a second session of Congress coming up, so the bills and support carry forward in 2022. Also of note, Rep. Elaine Luria (D-Va.) introduced her bill as an amendment to the House version of the NDAA, knowing it would be called out of order due to budget impacts. She has committed to continue this effort, as has Rep. Michael Waltz (R-Fla.), her original co-sponsor, who said he will work with the House Armed Services Committee to find the funds

Stay tuned: We will be calling on our members to boost support through the second session.

Support for improving the lives of our junior servicemembers and their families seemed to resonate with many on the Hill. While the number of co-sponsors was nearly the same as the TRICARE Young Adult effort, the stories and picture of servicemembers in line at food banks likely fueled congressional efforts to ensure supporting language was included in both House and Senate versions of the NDAA.

What’s Next? We are confident there will be some level of support in the FY 2022 NDAA. However, we have to be very attentive to the process of finalizing the bill through the conference committee as the two chambers have a significant difference in their provisions. The House excludes Basic Allowance for Housing (BAH) in the computation for the 130% of the poverty line, which is on par with other federal assistance, and as MOAA supports. The Senate’s provision, however, maintains BAH as a component in the poverty line computation, thus significantly reducing eligibility.

After the Senate approves its version, MOAA will need your help urging conferees to support the House provision for the final NDAA.

This was a lot of heavy lifting by our members, especially given the challenges of engaging legislators virtually — efforts not possible without our grassroots commitment to service. Our advocacy team at MOAA headquarters continues to work equally hard on these three topics and many more as noted in our legislative priorities.

Stay tuned for updates on all of these through The MOAA Newsletter. If you are not getting this newsletter, check here and lend your support for these and other important advocacy efforts.

And please share these efforts broadly with those who may consider supporting MOAA as the leading advocate protecting service-earned benefits for those in all eight of our uniformed services, past and present, their families, and survivors.

In a survey of more than 2,000 children of service members, findings indicate a need for more services and programs, according to advocates.
Read more here:
Military Teens Are Struggling With Mental Well-Being and Food Insecurity
at October 05, 2021