Editor's Note:  Another long-time member and Past President of our MOAA Black Hills Chapter has passed away.  Below is the obituary for Colonel Dennis "Denny" York as it has appeared on the Osheim & Schmidt Funeral Home website.  Colonel York Our condolences to the entire York family.  Please note the highlighted area below regarding Visitation, Celebration of Life and Burial for Colonel York. 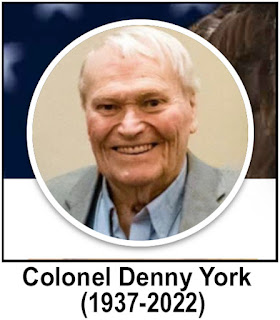 Visitation will start at 10 am on Thursday, August 4th at Shepherd of the Hills Lutheran Church, Lead, South Dakota. Celebration of Life Service following at 11 am. Lunch will be served after the service.  Burial with full military honors will take place at Black Hills National Cemetery, Sturgis, SD at 2:00 pm.

Denny was born February 28, 1937 in Sioux Falls, SD to Jean F. and Leona E. (Tilbury) York. He grew up in Sioux Falls and graduated from Washington High School.

He graduated from South Dakota State College in Brookings, SD with an Electrical Engineering degree. While at State, he played football, wrestled, and was commissioned a 2nd Lt. through the ROTC program. He married Beverly D. Ordal in 1958. He was a career army officer. During his service, he graduated from the University of Florida with a Masters of Civil Engineering.  He attended the U.S. Naval War College, Industrial War College, Georgia State University in Management, and numerous Army Special Weapons and Engineering schools. He was a member of Tau Beta Pi. His military awards included three awards of the Legion of Merit, five awards of the Bronze Star, three Air Medals, and numerous other commendation service medals.

He commanded and served in engineer combat and construction units in Vietnam and Germany during nine years of overseas service. Denny was the Vicksburg, MS District Commander in the 1980’s responsible for Corps of Engineers Civil Works in most of Mississippi, Arkansas, and Louisiana. While not with his troops, he taught ROTC at the University of Rhode Island, conducted a reduction of engineer officers after Vietnam, and was a protocol officer for the Army Chief of Staff and the Secretary of the Army. He was the Executive Director for Civil Works out of Washington DC, for the Corps of Engineers when he retired in December 1986.

Upon retirement from the Army, initial plans were changed due to health. Denny and Bev bought the Ponderosa Motor Lodge in Lead, SD, operating it as a family venture. While Bev and son, David, orchestrated the Lodge, Denny served as City Commissioner and Mayor of Lead two terms. He also served on various boards over the past years including Lead-Deadwood Chamber of Commerce, Shepherd of the Hills Lutheran Church, Municipal League, Salvation Army, Black Hills Boy Scout Council, Lawrence County Teen Court, Terry Trojan Water District, and the Lead-Deadwood Sanitation District. He was a member of the VFW, American Legion, Golden Gang, Eagles, Kiwanis, SD Service Academy Nomination Committee, and the Military Officers of America Association.

During Denny’s lifetime, he dedicated and advocated for his country, his communities, his alma maters, his God, and his family.  His life was to generously and sincerely serve others! A very patriotic man, he never hesitated to show his pride to serve his county and to support any person in uniform.  He and Bev immersed their family in every community in which they lived.  Home truly was where the family was at any given time.  Along the way, they created lifelong friendships. A huge supporter and fan of SDSU, Denny enjoyed attending activities and watch parties.  His faith and church family were very important to him. His life revolved around his love of family, supporting and connecting with them at any opportunity that he could.  He was very proud of his family.