Base officials have coordinated with the Defense Commissary Agency to adjust the hours of service at the Ellsworth commissary to ensure access to basic necessities for mission essential personnel, and have also announced that issuance of visitor passes to access the installation will be suspended. All currently valid visitor passes will expire on March 25.

To further reduce traffic and the number of visitors onto the installation, and to combat the spread of COVID-19, effective immediately the base will not issue visitor passes without an exception to policy letter. Exceptions to the policy must be routed through an Airman’s squadron commander for approval. Reasons that will merit strong consideration for an exception to policy include requests for childcare or new baby assistance; college students who are home and do not have an ID; and other humanitarian or hardship issues. The change will not impact contractors or deliveries at this time.

“These are part of our proactive measures to ensure the safety and welfare of our Airmen, their families, and the entire community, all-the-while making sure we remain capable of accomplishing our mission of providing combat power – anytime, anywhere,” said Col. David Doss, 28th Bomb Wing commander. “Our first priority is the health and well-being of our team and our community. These measures help us do that.”

As of March 22, Ellsworth is in Health Protection Condition (HPCON) Alpha+. HPCON A is determined when there is a limited threat to personnel based on the existence of a disease, or unusual human health threat that has the potential to rapidly move into the local area. The base continues to test its members who meet criteria, and work with local health care providers to ensure it has the most updated information and access to care for all Airmen, their families and those who rely on Ellsworth for their health care needs.
at March 23, 2020

This article by Gina Harkins originally appeared on Military.com, the premier resource for the military and veteran community. Get more coronavirus news and resources at MOAA.org/coronavirus. 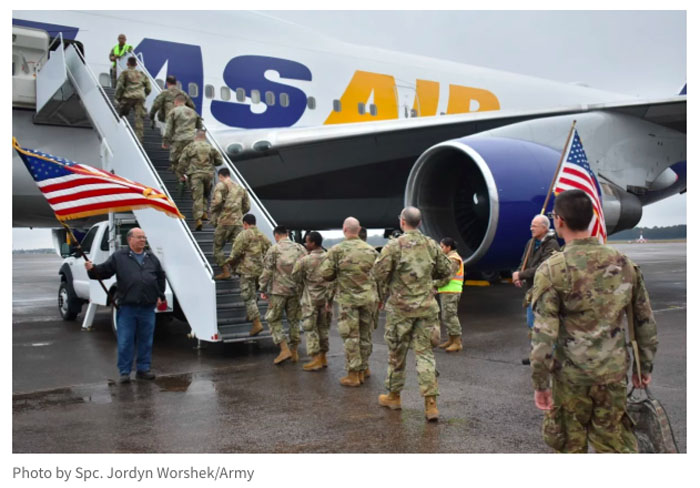 Pentagon officials announced sweeping travel restrictions for troops and their families late March 13 that will halt all domestic travel, including duty station moves and temporary assignments, for nearly two months as officials try to stem the spread of the deadly coronavirus.

Starting March 16, service members, their families and Defense Department civilian workers are restricted in how they can move about the U.S. and its territories. The unprecedented moves were approved by Deputy Defense Secretary David Norquist and extend through May 11.

A memo outlining the restrictions say the continuing spread of the new coronavirus, or COVID-19, necessitates immediate action.

"These restrictions are necessary to preserve force readiness, limit the continuing spread of the virus, and preserve the health and welfare of Service members, DoD civilian employees, their families, and the local communities in which we live," the memo adds.

[RELATED AT MILITARY.COM: Here’s What the Coronavirus Travel Ban Means for Military Families]

The measures were announced just hours after President Donald Trump declared the global pandemic a national emergency in the U.S.

The new rules apply to all Defense Department military and civilian personnel assigned to military bases or facilities inside the U.S. and its territories. The memo also applies to family members of those personnel.

Those already out on temporary assignments will be allowed to return to their home station when that mission ends. Service members approaching retirement or end-of-duty contracts are also exempt from the travel restrictions.

Otherwise travel will only be approved if it's determined to be mission-essential, is necessary for humanitarian reasons, or warranted due to extreme hardship, the memo adds. Only top brass or civilian leaders are allowed to grant those exemptions.

"These exceptions are to be done on a case by case basis, shall be limited in number, and shall be coordinated between the gaining and losing organizations, as appropriate," the memo states.

Another memo also issued late March 13 introduced a host of new restrictions at the Pentagon. Outside tours of the building are canceled, international military partners will no longer be allowed to visit, and anyone who has traveled outside the U.S. must not enter the Pentagon for at least 14 days.

A news release from the Defense Department announcing the new rules says additional guidance surrounding the coronavirus will be issued "as conditions warrant."

"Our goal is to remain ahead of the virus spread to our military force remains effective and ready," it states.
at March 16, 2020