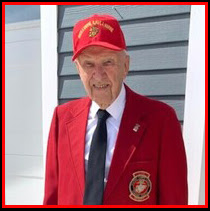 We are deeply saddened to report the passing of yet another of our military comrades.

CWO4 Vernon McGee of Rapid City passed away Monday, September 5, 2022.  He was 89 years old.   Vernon only recently affiliated with our Black Hills Chapter of MOAA and had attended our most recent meetings with his wife, Dr. Nancy Fay Phipps.

Vernon was preceded in death by five brothers, a sister, granddaughter, parents, son, and daughter.